In the gorge of Therisso, where in the summer plants and trees are either greyish green (Salvia’s, Olive tree, Jerusalem Sage, to mention some) or dark green (Conifers, Oak) one plant draws the attention: Cionura erecta, with its bright green leaves and large clusters of white flowers.  Because it is a poisonous plant, goats and sheep do not approach it and in many gorges and other places it is quite common (I found several plants in the gorge of Messavlia).
Cionura erecta is placed in the family Apocynaceae subfamily Asclepiadoideae tribe Marsdenieae (the old Asclepiadaceae family is now included in the subfamily Asclepiadoideae). The Apocynaceae family is grouped in 5 subfamilies:
Rauvolfioideae
Apocynoideae (see my drawing of Nerium oleander)
Periplocoideae (see Photographs section with picture of the Cretan Periploca)
Secamonoideae
Asclepiadoideae
Much research and comparisons have been done by great taxonomists like Reveal, Cronquist, Thorne, Takhtajan, Stebbins and others; Reveal notes ”The question of concern here is not the number of subfamilies but the number of families” and after much discussion concludes (in PBIO 450) that  “the distinctions are still incomplete”.
Cionura erecta is obviously in its correct place (in the Asclepiadoideae - Marsdenieae together with the genera Cynanchum and Marsdenia) because it was previously called Cynanchum erectum L and Marsdenia erecta (L.) R.Br.

Cionura erecta is a woody-based 50-100cm high and up to 2 m wide perennial with numerous herbaceous sprawling stems, often twining at the tips, with copious poisonous milky juice. At first sight the plant seems glabrous but through a stereo-microscope it turns out that the stems and pedicels are minutely pubescent or ciliate.
The leaves are long-stalked and the leaf blades are glabrous and herbaceous, 7-12 cm long, 4–8 cm wide, broadly ovate, basally cordate, apically acute to acuminate (heart-shaped) and older leaves are shiny.
The (opposite) leaves are described as ‘exstipulate’ but if you take a look at my drawing in detail 3, you’ll see that at the base of the 5 cm long petiole where stipules could be, there are minute structures (round until finger-shaped) and perhaps they could be called ‘stipulate but reduced to colleters; these  colleters usually present in the stipular position’.
The lax inflorescences are axillary or terminal cymes or rounded umbels of many white flowers, from April until July.
The flowers are radially symmetric, 5-merous, 10-13 mm across with oblong blunt lobes and although the petiole is microscopically minutely pubescent, the calyx is hairless, see details 4 and 8 in my drawing.
The calyx consists of 5 connate sepals, they are only basically fused. In the sinuses you’ll find several minute colleters, see detail 5. Colleters on the inside of the base of the calyx are common in Apocynaceae. 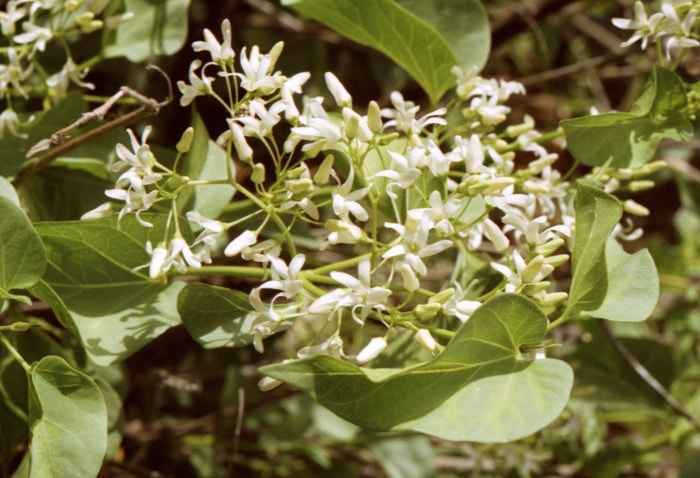 Cionura erecta in the gorge of Therisso
If you take a look at detail 1, at the bud at the extreme left side, you’ll see that the 5 corolla-lobes in the bud-stage are contorted or slightly twisted, always clockwise. In the open flower these petals are still a little reflexed (detail 4), they are white (rarely pinkish or cream-white), oblong to lanceolate, free and measure about 7 x 2 mm. The size of an open flower is approximately 12 mm.
Just above the corolla is the whorl of hooded and horned appendages that make up the corona, an elaborate crown of nectariferous appendages between the corolla and the sexual parts. These horns are oblong, slightly inflexed, about twice as long as the anthers. The five highly modified stamens are united in a ring and adnate to the stigma, forming a gynostegium. This gynostegium is sessile, exposed just above the base of the corolla. The anthers are bilocular and opening by apical pores. The plants are entomophilous, meaning that like many plants they depend on insects for pollination; in the case of Cionura that can be bees, flies, butterflies, etc. But then there is something very interesting....... 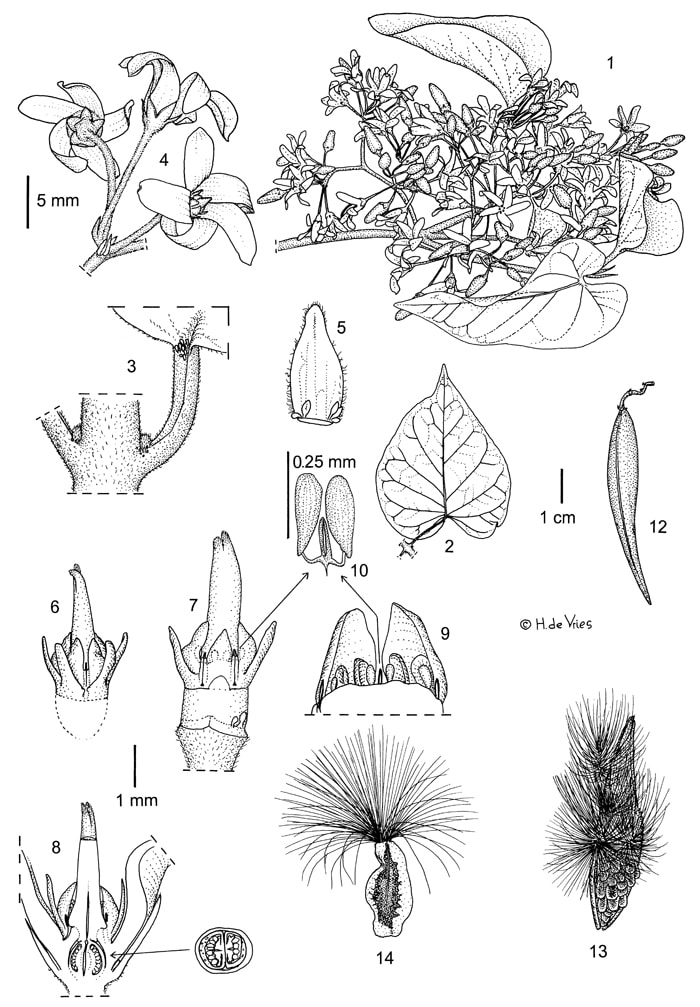 The pollination mechanism is conspicuously specialized: the insects’ leg or antenna or palp is trapped by the anthers’ clamp. The anthers produce paired sacs of pollen called pollinia, see detail 10 in my drawing. The one pollen-sac of an anther is connected to the pollen-sac of the neighbouring  anther by 2 arms which end in a claw or clamp called corpusculum, the central part of a pollinium, the clip connecting the thin arms (the translators) that are attached to the pollen mass. The other pollen-sac (in Cionura and in most Asclepiadoideae there are only 2 loculi and pollen-sacs per anther, they are bilocular) is connected by such a pollinium with the pollen-sac of the next anther. The units of two pollen-sacs connected to each other by two arms and a clamp, are called “pollinia” and these are transferred as a unit during pollination. Please take a look at details 6 and 7 in my drawing: the gynostegium has 5 grooves (the staminal locks; in detail 6 one groove is visible, in detail 7 two grooves are visible) and on top of every groove is a black ‘thing’, the clamp or corpusculum (in many other Asclepiadoideae this corpusculum is not a claw or clamp but a sticky disc). In detail 9 you can see two anthers from the inside with a dark corpusculum between the two anthers. This clip is connected to the two neighbouring pollen-sacs by two arms, the translators. When insects visit Cionura flowers they get trapped from a leg or antenna in this clip and when they withdraw from the flowers, the pollinia with its pollen mass cling to the insects’ leg or antenna, ready to be transferred to the next flower. A good explanation of the pollinia can be found at: http://www2.arnes.si/~sspimule/dpks/jest/Clanki/Opraseva/Polinate.htm

If you take a look at detail 9 (lengthwise section of flower), you’ll see that the ovary is superior and consists of 2 carpels that are free from each other at the level of the ovary and become united somewhere in the middle of the massive stigma. Each single locule has numerous marginal (ventral) ovules.
Although there are two loculi, only one develops into a fruit with a thin papery placental flap. The fruits are light brown follicles, smooth, up to 8 cm long and 1-1.5 cm in diameter, narrowly-ovoid  and apically acute. The seeds are up to 1 cm long and 5 mm wide, with a half a mm wide marginal wing all around and a terminal tuff of long, white, silky hairs.

Habitat:
You can find Cionura in forests, in rocky places, gorges, river sides and even in coastal sands in Crete (many plants in the gorges of Topolia, of Messavlia and of Therisso), in most of the Aegean islands, the South and Eastern parts of the Balkan peninsula and Asia Minor to Afghanistan.

Other members of the Asclepiadoideae that you can find in Chania are Cynanchum acutum L, Vincetoxicum canescens (Willd.) Decne and Gomphocarpus fruticosus (L) Aiton from S.Africa: naturalized in waste places

In A LIST OF PLANTS KNOWN TO CAUSE DERMATITIS by Nancy C.Cole from
Florida Department of Agriculture and Consumer Services / Bureau of Entomology, Nematology and Plant Pathology/ Botany Section she reports:
Cionura erecta – Marsdenia : sap blisters skin
(http://www.doacs.state.fl.us/pi/enpp/botany/images/poisonplants.pdf)